Facebook Has Announced New Format For Its Desktop Version

How to Start a Successful eCommerce Platform in 2022

Copywriting | What is Copywriting, Types, and Formulas?

Subscription eCommerce Business: All You Need to Know to Start 2022

How to Increase Your Sales During Halloween? 2021 Guide 🎃

How to Launch an Online Store? A Step-by-step Guide

Hence, we can easily note that Facebook company -including Messenger, WhatsApp, and Instagram- continuously adds new features, formats, and updates to all their platforms. On this front, we can confirm that every day, we can hear about new updates on Facebook platforms.

It also should be mentioned that the company has spent all these efforts, as a desire to enhance its users’ experience, as it has an enormous number of users from all over the world. In addition, it seeks to maintain its users, as well as capturing new customers to the platform.

This week, Facebook announced on its official profiles that it has spent several efforts to launch a new format for its Desktop version. It has been discovered that the company is testing out a new layout, in order to make using Facebook more easier and simpler for all users around the world. 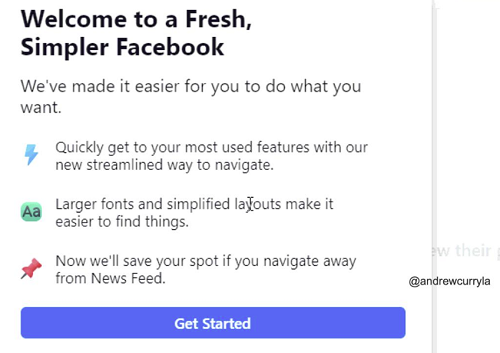 Back in May, Facebook held its annual F8 conference, where the company discusses and share all its plans for the future of its all platforms, including WhatsApp, Messenger, and Instagram. Through this annual conference, the company has revealed a great suite of new updates, features, additions, and more.

These new additions to Facebook’s main app were including new changes that focus on groups, an app redesign, and Facebook Dating. Launching a new layout for Facebook Desktop versions came at the top of the company’s App Redesign plans.

This week, Andrew Curry, a digital marketing & social media expert has spotted on his official Twitter account that Facebook has now begun launching the new experience to users, with a prompt notifying them of the change.

What Does The Company’s New Layout Aime to?!

On this front, it should be pointed out that Facebook new Desktop layout is considered to be an attempt to enhance all its users’ experience worldwide, as this new format will make it easier and simpler to navigate to their favorite elements.

Additionally, it was noted that this new Desktop layout comes with abs along the top of the screen and a more compressed view. It means that all Facebook users from all over the world will enjoy a different, fun and more controlled browsing experience on Facebook Desktop version.

As noted also, by pressing each tab from the tabs that are located at the top of the screen, users will be taken to a dedicated experience.

In the same side, Facebook has confirmed that it intends to make its desktop version more in line with the mobile app.

As confirmed by the company:

“This redesign makes it easy for people to go from public spaces to more private ones, like Groups. There are tens of millions of active groups on Facebook, and when people find the right one, it often becomes the most meaningful part of how they use Facebook. That’s why we’re introducing new tools that will make it easier for you to discover and engage with groups of people who share your interests.”

Finally, we should mention that there are too many Facebook users around the world can see the new Desktop layout, as well as enjoying the new format, so if you do not see it up till now, do not be worry; you will enjoy it soon.

Build your online store with ExpandCart to enjoy marketing consultation, 24/7 customer support, and a full marketplace of apps & services tailored to every eCommerce business.

What Is the Easiest and Smartest Way to Turn on Facebook Auto-reply on Messenger?

Copywriting | What is Copywriting, Types, and Formulas?

What is copywriting? A question as basic as can be, yet as vital as can be. Whether you’re aspiring to dive into

Customer engagement is an essential part of a successful business. In generations past, reaching a wider audience was a formidable obstacle

How to Pick the Best Domain Name for Your eCommerce Website